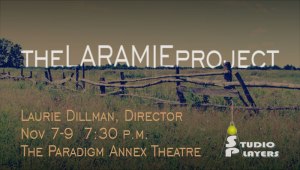 The cast of Studio Players’ second production of the 2013-2014 Season, The Laramie Project, has been selected. In order of appearance, they are Michael Eberhardy, Eric Rautmann, Hannah Benton, Elisabeth Albeck, Dan Hennell, Mike Roehl, Angela Ramey, and Jennifer Schleinz. Each actor portrays several characters in a series of vignettes that reenact interviews with the residents of Laramie, Wyo. following the murder of Matthew Shepard.

The Laramie Project is directed by Laurie Dillman and runs November 7-9, 2013 at The Paradigm Annex Theatre. Performances begin at 7:30 p.m. Tickets are $10.00 in advance at Paradigm Coffee & Music or at the door. Seating is limited.

Tell us what you think Cancel reply